Meandering out of Sloane Street tube station we blinked at the brightness of the sun; thanked our lucky stars we hadn’t been at the show the previous day in the torrential rain; picked the straw from our hair – our vague attempt at maintaining a city slick appearance, and wondered how on earth to get to the Royal Hospital grounds.

We needn’t have worried, a clear tide of show goers flowed towards the venue and we were soon bobbing along on the current.

Wander a few feet into the show grounds and London disappears. You are instantly absorbed into a vast world that pops up miraculously in a matter of weeks, once a year, and disappears even more quickly, in the blink of an eye. 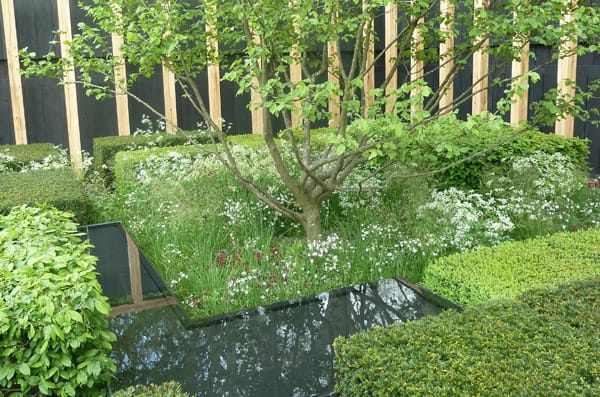 The centre of the action is Main Avenue, where the big-name show gardens attract the biggest crowds. We’d been warned we might be disappointed by the scale of the gardens – that they might seem small – but not a bit of it.

With incredible skill each designer has managed to create a unique sense of space. The play with light, structure, form and colour is highly crafted – a treasure of tricks to learn and use at home. 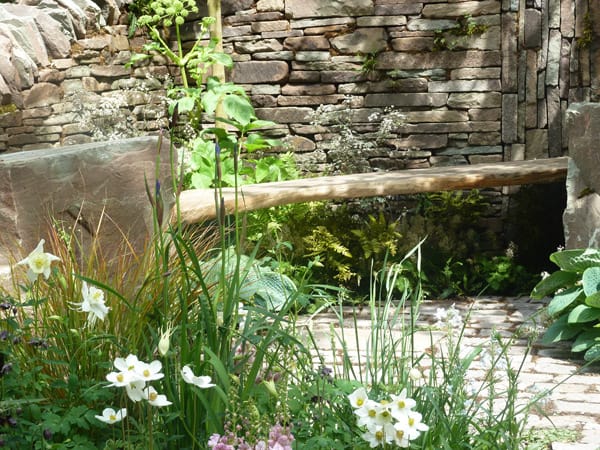 Play with light and shade in the An Carreg Garden, designed by young brothers Harry and David Rich. Image courtesy, School House Garden.

It’s easy to feel overwhelmed by the spectacle and saturated by the sheer volume of plants and design, but if you break the gardens down into elements, then it’s much easier to see how the designers ply their craft. 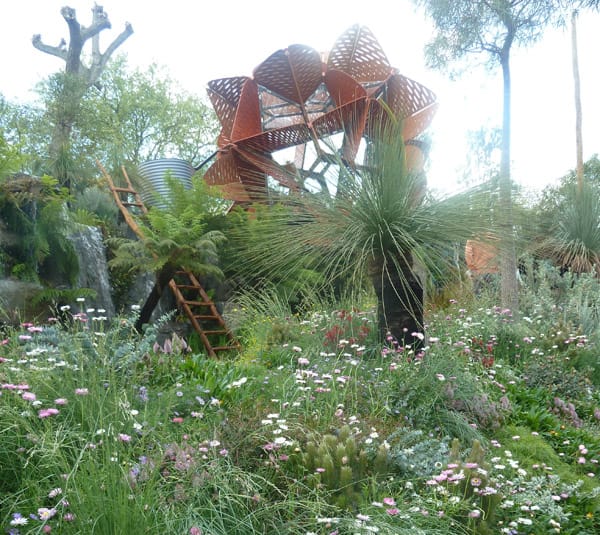 Most of the show gardens use water, to bring serenity and peace to the planting, or for its reflective qualities (Christopher Bradley-Hole’s Telegraph Garden), or to invoke a specific sense of place and eco-dynamism (Phillip Johnson’s  Aussie Trailfinders Garden).

And you don’t need a fat wallet to play with water; even a broad shallow bowl of water placed to reflect the dappled light beneath a small tree can have a magical effect.

The Great Pavilion is the other big draw, it is enormous and after you’ve recovered from the heavenly scent that greets you, the first thing we noted was the incredible work that goes into bringing the exhibits to Chelsea.

We were especially intrigued by the gorgeous rose arch on the David Austin stand, heavy with the blooms of Paul’s Himalayan Musk, a vigorous rambler that shoots up to 30ft within a few years of planting. How on earth did they do it?

One of the other things we noted was that all the hard work. And, these amazing gardens and displays would be dismantled and gone within a few hours. All that blood sweat and tears. All those months of forcing plants into bloom during one of the coldest springs on record would end abruptly in a sell off to commence at 4.30 on the dot. If you’d come and won a Gold Medal it might all have been worth it, but still…..? 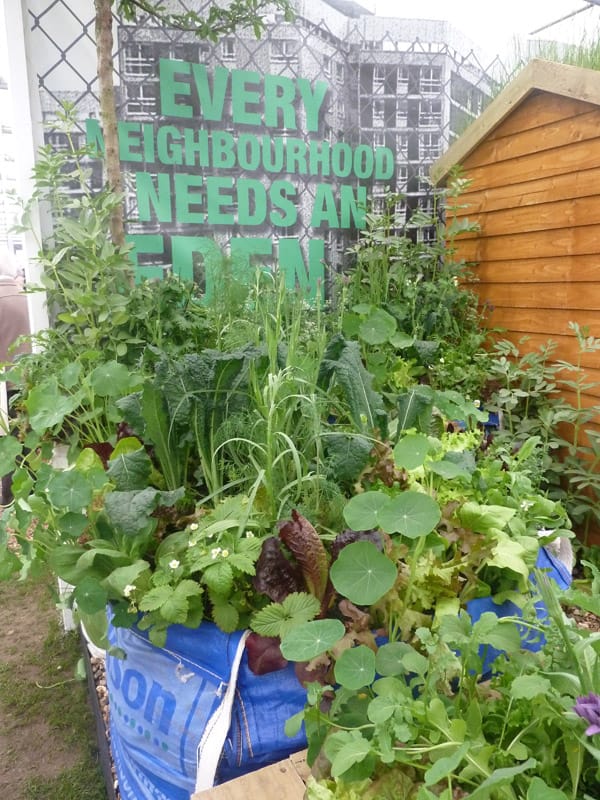 We were heartened then to come across the Groundwork stand. Groundwork is a charity devoted to bringing green spaces to urban locations.  Following the show their ingenious garden – an up-cycled allotment that used an old chest of drawers as a veg planter and building merchant bags as raised beds – was destined for a lucky primary school.

They’re also prime movers in the RHS Chelsea Re-Use Scheme that finds a post show home for plants and landscaping materials in community gardens around London. But when the count to 4.30 was hailed through the loudspeakers and the ‘sell off’ bell tolled, we began to wonder if there’d be anything left. What had been a very gentile affair took on a rather savage air.

There was carnage at the stands as smartly dressed women (we spotted a few Barbour jackets and Meindl shoes) battled with each other over blowsy blooms and tottered out the marquee, trolleys laden with forced plants in full flower that, if they ever made it home in one piece, would perish instantly in any real garden. 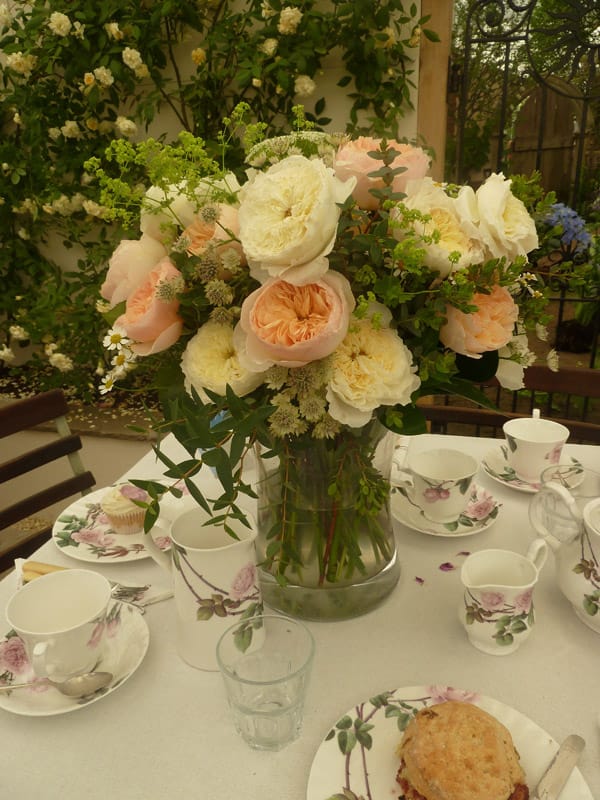 Despite the sell off, all remained serene and ladylike at the David Austin exhibit. Image courtesy, School House Garden.

It was most un-Chelsea and we took refuge in the David Austin stand, who, sensibly were not selling off.

There we were safe from bargain hunters, inside a circle of gorgeous, highly scented roses and our perfumed sanctuary afforded us the opportunity to ask about that arch with the big rambling rose. How did they do it? The answer? For 51 weeks of the year the rose rambles up over the arch in the David Austin nursery, it is cosseted like a spoiled child and pruned to absolute perfection, then for the 52nd week it is uprooted and transported to Chelsea to hold pride of place on the DA stand.

From the outside Chelsea may look like a pop-up, five day event, but from the inside, for the growers, designers, organisers and exhibitors it’s a year round commitment and planning has already started for 2014.

A big thanks for all their hard work. We’ll be back.